Fidelis played the singer Clara Hibbert both at Glasgow Citizens and in the West End, directed by Philip Prowse and starring Rupert Everett and Maria Aitken.

This early work by Coward contains at least one hilarious caricature ‑ Fidelis Morgan, an egotistical opera singer  The List

Clara Hibbert (wittily transformed into a creature of ungainly, distracted awkwardness by Fidelis Morgan) who sings at society receptions  Plays and Players

Fidelis Morgan makes Clara a fleshy matron, who announces headaches as though they were earthquakes and makes exits with all the grace of a startled sheep The Independent

Performances are similarly formalised, from…to Fidelis Morgan as the dilettante singer, imperiously commandeering the sofa and emitting a blood‑curdling shriek when she loses her handbag The Times 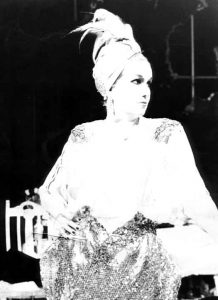 Fidelis Morgan, utterly transformed from playing Schiller’s Queen Elizabeth, is a raven-haired, predatory Ruth clad in scarlet: a vampire of the drawing room  The Sunday Times

“Fidelis Morgan’s icy Ruth…suggest an undoubtedly superhuman malignance at work beneath the antics – ultimately transforming into a fury, most elegantly dressed for cocktails”  Plays and Players

Fidelis Morgan giving a high profile performance in the Edith Evans mould, crystal clear and timed to perfection, as the formidable Duchess of Berwick  Plays International

Performances are delicious – Fidelis Morgan plays the dragon-like Duchess as a close relation on Lady Bracknell, pronouncing Christian names as if they were social diseases The Independent

Fidelis Morgan excels as the Duchess of Berwick, gleefully embracing the contrariness of social convention and handling the art of the put down with the skill of that more contemporary dame, Edna Everage The List

A precise, delightful contribution from Fidelis Morgan as the tyrannical, trouble-stirring Duchess of Berwick Financial Times

A WOMAN OF NO IMPORTANCE

Fidelis played the housekeeper Mrs Pearce in Shaw’s Pygmalion at Nottingham Playhouse, directed by Pip Broughton, with a cast including Josie Lawrence and Christopher Timothy

In Fidelis Morgan’s grimly imperious performance she has all the deference of Lady Bracknell and she spits out her lines with a lofty contempt which would make Mrs Danvers seem like the last word in warm approachability. The Independent 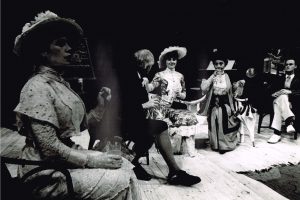 I thought that Fidelis Morgan in a very small part was rather good. She was very convincing, this poor pathetic woman in a sort of genteel poverty Kaleidoscope Radio 4