But the evening undoubtedly belonged to Ann Mitchell and Fidelis Morgan who gave real stature to the two very different royal women… Fidelis Morgan, in turns irresolute and domineering as Elizabeth, was always every inch an absolute monarch  Plays and Players

Queen Elizabeth’s costume for this production was made of duvets, jewels and other heavy items and it took two dressers to lift it on as it weighed about 5 stone. It was used for many years as a demo to children who think they might WANT to be an actress.

A remarkable production by Philip Prowse and adapted by Robert David MacDonald  features five actresses who all played Anna, and each took on one of the other roles.  Fidelis had the duo of the angry passionate Anna, and Anna’s nemesis, Lydia Ivanovna.

Anna is beautifully handled by the five actresses… The Independent

Fidelis Morgan is the most interesting of the five women whose portrayals merge into a composite study of Anna.  The Scotsman 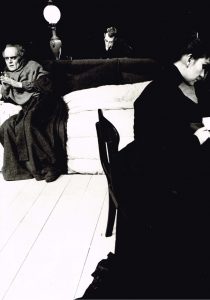 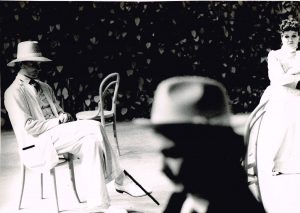