Fidelis adores to direct, preferably plays which are out of the ordinary and crammed with theatrical opportunity.

Please click on the live titles for further information and photos

But It Still Goes On – Finborough Theatre

A long lost play by Robert Graves was given its first ever airing with an all-star cast and directed by Fidelis. 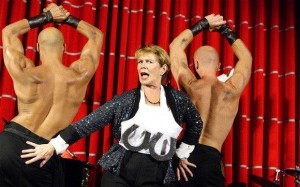 “Hysterical, camp and laugh out loud” Everything Theatre

“The tiny Finborough Theatre in Earls Court is well known for punching above its weight: Currently showing in the intimate upstairs space is a new production of ‘Drama at Inish’ by Lennox Robinson , brilliantly directed by Fidelis Morgan’  Time Out

Fidelis Morgan’s production is full of hustle and bustle as the cast of thirteen swirl around… it is all played with a jovial silliness that lifts the heart.  The Public Review

‘The reading of this play was extraordinary with a fantastic cast who played with such zest and enthusiasm.  The director should be applauded in gaining such a cast and bringing to the play such enlightenment.’  London Theatre Review

By Stewart Pringle at the Finborough.  Fidelis directed a reading of this new play about The Theatre, with a cast including Hermione Gulliford, Jack Klaff and Ian Redford.

‘Certainly worth catching’ – Time Out

Fidelis directed this chamber opera with a cast of three:  Ulrik Cold, Yung Hee Kim and Stewart Permutt as the mute.  Sadly no photos.

Fidelis directed the revue Performing Ceals which starred Celia Imrie and Celia Foxe.  The show opened at La Bonne Crepe and played subsequently at The Kings Head and the Comic Strip

Fidelis directed a rehearsed reading of her own adaptation with a cast which included Richard E Grant, Celia Imrie and Rosalind Knight

While Artist-in-Residence at University of California at Davis, Fidelis directed Susanna Centlivre’s The Basset Table, re-entitled The Gambling Lady 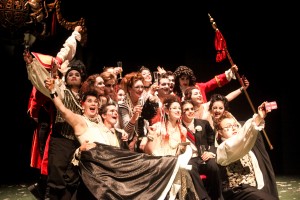 Fidelis has also directed illustrated lectures on The Female Wits and The Female Tatler, Wicked – women’s humour, as well as Women Haters of the World Unite which have toured internationally.

Fidelis was assistant director at Glasgow Citizens Theatre under the directorship of Giles Havergal, Robert David McDonald and Philip Prowse.