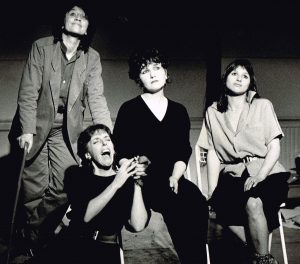 A revue by women performed and directed by women.  With sketches by Fay Weldon, Victoria Wood, and many others, including Fidelis.  The photo shows a satire on The Three Sisters, called The Three Blisters, written in the 1940s by Mary Dunn.

was written especially for Fidelis by Tom Kempinksi.  Directed by Sue Parrish, it played at The Kings Head and was revived at the Half Moon.  Fidelis took the role of Jean

The Birmingham Rep Christmas show, Fidelis played Suzette.  In the show she had to tap dance, juggle, and ride a bike onstage while twirling chinese ribbons