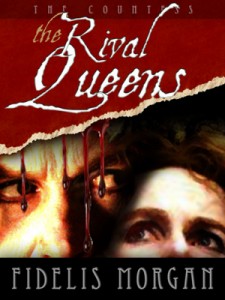 London 1699. Those intrepid and impecunious heroines the Countess Ashby de la Zouche and her maidservant Alpiew are once more scavenging for scandal to entertain the readers of that scurrilous rag, the London Trumpet. With the bailiffs as ever in hot pursuit, the Countess and Alpiew are reduced to seeking refuge in a philosophical lecture at the York Buildings concert hall. But their expectations of a dull evening are confounded when one of the players staggers on to the stage, her hands dripping with blood. A doyenne has been decapitated under their very noses.

The unlikely sleuths find themselves with an abundance of suspects: players, phanatiques, punks, pink ribbons, a Punch and Judy man – not to mention a painter with a silver proboscis. Determined to leave no stone unturned, they pursue their quarry from the Tower of London to Bedlam, with a brief detour to the wilds of Wapping. Along the way they uncover (with a little help from Samuel Pepys) a web of intrigue and corruption that extends to the highest echelons of society and the judiciary.

The Rival Queens is also available in …

One Response to “The Rival Queens”