Directing » But It Still Goes On by Robert Graves

BUT IT STILL GOES ON had a ravishing cast, including Alan Cox, Sophie Ward, Jack Klaff and Rachel Pickup. 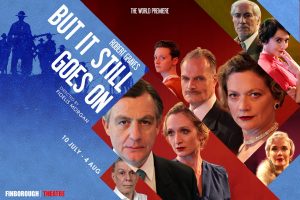 A previously unperformed play by Robert Graves, dealing with the fallout from the First World War, homosexuality, both male and female, and the familial problems of surviving a successful but predatory father.

Directed by Fidelis at The Finborough Theatre, July 2018