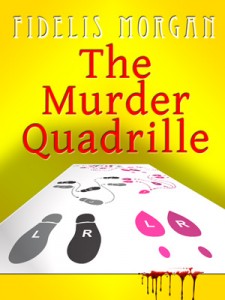 In this intriguing suspense novel written in the Hitchcock mode, Fidelis Morgan plays tag with the reader, taking them through the minds of six guests at a dinner party where Murder is on the Menu.

There’s a dead body on the Common, so what else can you talk about over dinner?  But for a husband and wife whose marriage is on the rocks, their bank manager, their lawyer and his bimbo girlfriend, is it a safe conversation to have, particularly when a writer of lurid crime fiction is also there to make up the numbers.  There’s a very sharp knife about the place too.  And whatever did happen to the missing librarian?

“Creepy yet hilarious, filled with startling twists and thrills, this one had me laughing even as I was feverishly turning the pages. Only Fidelis Morgan can pull off a caper with such wit and style!” Tess Gerritsen

“Fabulously funny, twisted, dark and unpredictable. You couldn’t pry it out of my hands!” Rebecca Chance

“This is written with a light touch but it is a totally engrossing read.  As a mystery, the question is primarily “what is actually going on?” rather than “whodunnit”, but there is an element of that as well… This is an extremely enjoyable read.  Highly recommended.”  Classic Mystery

“A cross between Wilkie Collins and Alfred Hitchcock, with a touch of Patricia Highsmith thrown in.” Celia Imrie

“This is possibly the funniest crime book I’ve ever read…  I found myself engrossed from chapter one. Every time you think you know where the story is going, it performs a switchback worthy of any white knuckle ride.  In short, expect the unexpected, because this is a rip-roaring page turner that wrong-foots you at every end and turn.”  www.crimefictionlover.com

One Response to “The Murder Quadrille”