The obvious course for an adapter who wants to tackle the story in an original manner would be for him, or in this case her, to cleave the character of the schizophrenic hero so that two actors play him. Fidelis Morgan takes an altogether more intriguing course, cleaving the object of the hero’s obsessive love, the vapid and amoral Netta. Jeremy Kingston (The Times)

This is a whydunnit at its best…In Morgan’s stylish adaptation. City Limits

“Hangover Square has been well served by its adapter Fidelis Morgan… It is not a realistic staging of its parent novel, but an expressionistic nightmare hung on its bones… The result of this bold and intelligent visualisation is to place the action firmly within the drink-sodden skull of Bone himself, and therefore our own, which is surely the author’s original intention”  Hugo Williams, Sunday Correspondent

Fidelis Morgan…has done a bold thing in adapting Hangover Square… Written in an age when women who were perceived as destroyers of men deserved, at least in literature, to be murdered, Morgan has added a subtle new dimension to the story. She has freely adapted the novel, and created two Nettas. Avoiding the obvious trick of splitting Netta into evil “whore” and pure “innocent” fantasy, she uses both actors to portray her interchangeably. She does not shrink from showing up Netta for all her vanity and petty cruelty, yet saves the play from being an unquestioningly women-hating entertainment… Theatrical in the best sense, atmospheric, inventive and highly enjoyable.  Clare Bayley, What’s On 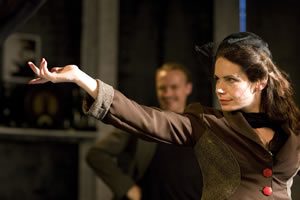 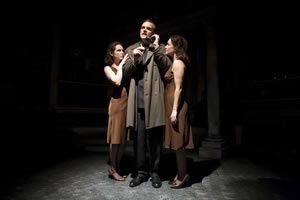 An  evening that is always troubling, always absorbing – Benedict Nightingale, The Times

Fidelis Morgan’s adaptation is vivid and poetic. – The Stage

Alcoholics frequently have blurred vision, but the clever thing about Fidelis Morgan’s adaptation of Patrick Hamilton’s novel is that it makes the audience actually see double. There are always two Nettas on stage. One is the small-time femme fatale who is the object of the gin-soaked George Harvey Bone’s obsession; the other Netta is the insistent voice in George’s head who is constantly whispering that he must kill the thing he loves – the woman who uses and humiliates him. It is an intriguing theatrical device…This finely acted, sourly seductive evening is clear-eyed about the transactions we make with ourselves and others, and leaves the authentic vinegary tang of the morning after the night before in its wake.- Lyn Barber, The Guardian

“Fidelis Morgan’s stage adaptation takes risks with the novel while remaining utterly faithful to its spirit and atmosphere. Her big innovation is to have two actresses playing Netta – one representing the heartless minx in the flesh, the other the idealised version who exists only inside Bone’s disturbed mind, sympathising with him in his unhappiness, and urging him to kill the woman who causes him so much humiliation and grief. The two actresses take it in turns to play the two Nettas, creating a powerful theatrical representation of our hero’s confusion and tangential connection to reality… Theatrical justice has been done to a great novel I cannot recommend too highly”  Charles Spencer, Daily Telegraph 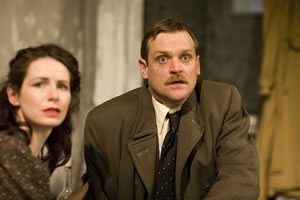 The semi-autobiographical Hangover Square (1941) tells the deeply unpleasant tale of an alcoholic named George Harvey Bone and his infatuation with Netta Longdon, a callous small-time actress who exploits him for money while entertaining lovers under his nose. Given the subject matter, Fidelis Morgan’s stage adaptation doesn’t make for easy viewing. Via George’s drink-sodden consciousness, we enter a claustrophobic world of emotional torment and sexual frustration. For instance, when George finally persuades Netta to join him for a romantic break in Brighton, she goes to bed with someone else. Jilted George wakes up to be repeatedly told that Netta and her conquest have been thrown out of the hotel because their lovemaking was too noisy. It’s little details like this that make Hamilton a true poet of humiliation.Fidelis Morgan’s accomplished stage adaptation of Hamilton’s 1914 novel returns the action to its original home, being staged in Earl’s Court’s Finborough Theatre… The dark surrealism of Hamilton’s novel is expertly transferred to the stage in this wily production that recognises the value of subtlety and manages to carry the audience with it on a twisted journey of anxiety, and personal daemons. – What’s On Stage

The Hamilton universe is perfectly captured in Gemma Fairlie’s well-acted production. With his air of perpetual bafflement and deeply ringed eyes, Matthew Flynn’s George is perversely attractive. The device of having two Nettas (Clare Calbraith and Caroline Faber), perhaps intended to suggest George’s schizophrenia or merely the double vision of the drunk, carries the narrative forward and provides an engaging visual enigma. Enlivened with deft period touches, it’s brilliantly accomplished – if unlikely to send you home with a song in your heart. – Time Out