Kiomi Romani – painted by SH Gill in 1955, just after it was moved from the Abbey Orchard to a field behind the Avon Hotel, Amesbury.

Due to a quirk of fate Fidelis Morgan was born in a red gypsy caravan, Kiomi Romani, which stood an apple orchard in the grounds of the ancient Abbey of Amesbury.  The Abbey, 2 miles down the road from Stonehenge, has a history of strong women, from Queen Ælfthryth to the three Eleanors: Brittany, Provence and Aquitaine.  Legend has it that Queen Guinevere retired to the Abbey after she heard of King Arthur’s death. Guinevere is supposed to have died in the orchard where Fidelis was born.

While staying with his patrons the Duke and Duchess of Queensberry in the 18th century building known as Amesbury Abbey (now an old folks home), John Gay wrote The Beggar’s Opera.

Fidelis’s mother was Irish, her father Liverpudlian. Liverpool (known then as the capital of Ireland) had taken a bad pasting during the Second World War. Housing and jobs there were scarce, so her parents moved south, where they hoped the money was. As her father was a recently qualified dental student, they picked a town that had no dentist and thousands of potential patients.

Amesbury is a service town. Nearby are the army camps of Salisbury plain, the RAF base at Boscombe Down and other military establishments like the germ warfare centre at Porton Down.  Not being able to afford the local rent they bought an old wooden caravan to live in, and despite being Irish Catholics, the Anglican vicar kindly allowed them to keep it in the church’s orchard.

Fidelis was delivered by her father, as no doctor would attend, thinking the family were gypsies.

Within days Fidelis was in Liverpool being shown to the family then across the Irish Sea to Dublin to be baptised in the same church where her parents married. 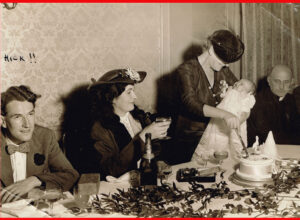 Christening party in Dublin, the priest only has eyes for the cake. 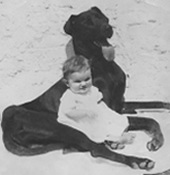 With Gunter, the Great Dane

Back in Amesbury, a black Great Dane called Gunter shared the tiny living space.  Fidelis was the original Home Alone kid, as every day when her parents went out to work they left her with this very special nanny – Gunter.  Today they would have been arrested!  Click here for baby pictures

Her father worked in one room on nearby Church street (the dental chair was behind a big screen, with patients waiting on wooden chairs only feet away). Her mother made most of the huge living room – an orchard – to paint, as she had recently graduated from Liverpool Art School.  Click here for childhood pics

Once the family moved into a small house it rapidly became a haven for all kinds of eccentrics: a dis-owned son of an Earl, an art student who dressed in drag to do the cleaning, artists from Paris who used the rooms to paint nude models, even ex-cons.  With this parade of glamorous people as live-in guests it was difficult for Fidelis not to be inspired to create colorful characters in her books and plays.

In her early teens, during her school holidays Fidelis spent a lot of time living in Montmartre, where her mother worked as a painter on the Butte. To ensure a decent evening meal Fidelis earned money painting clowns, playing the guitar and giving Americans guided tours in a cod French accent. (“Don’t you talk good English, little girl!”)

Fidelis was educated at boarding school: Yateley Hall, Farnborough Hill (the school which produced Anne Robinson of The Weakest Link) and Upper Chine. She had a bad school record and was expelled a few times, including from kindergarten.  Despite being very unpopular with the teachers, Fidelis managed to qualify for university and she gained an honours degree at Birmingham University Department of Drama and Theatre Arts. It was here that her interest in Restoration theatre started. Her tutor Jocelyn Powell wrote Restoration Theatre Production, a book which points out the parallels between Restoration staging and the theories of Bertolt Brecht. 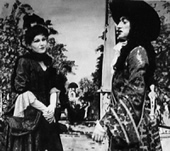 The Way of the World

Fidelis has worked as an actor with The Royal Shakespeare Company, Birmingham Rep, Nottingham Playhouse, Liverpool Everyman, the West Yorkshire Playhouse in Leeds and Glasgow Citizens, as well as touring with companies like Paines Plough and a stint in the West End.

It was while playing Polina in Chekhov’s The Seagull, sitting freezing in the wings at Glasgow Citizens, that she came up with the idea of writing The Female Wits.

Her career in writing including plays, non-fiction and whodunits, as well as pages and photos with reviews of her acting work on TV and in the theatre make up the rest of this website.

If you want to write to Fidelis, please use the contact form