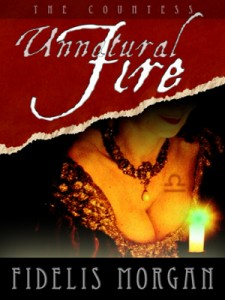 London 1699. Anastasia Ashby de la Zouche, Baroness Penge, Countess of Clapham, former mistress to Charles II, has fallen on hard times. Cast in into the notorious Fleet Prison by the bum-bailiffs, she is forced to turn to journalism: gathering salacious tit-bits for a scandal sheet. But the Countess and Alpiew, her maidservant, encounter more intrigue than they bargained for when a mysterious woman hires them to follow her husband Beau, whom she suspects of adultery.

Their pursuit of Beau leads them to playhouses, lecture halls, the half-constructed St Paul’s’ Cathedral and the dives of Alsatia, only to end abruptly in a Covent Garden churchyard – leaving the Countess and Alpiew implicated in a murder.

And worse is to follow, for to unravel their only clue to the identity of the real killer they must penetrate the mysteries of alchemy.

One Response to “Unnatural Fire”