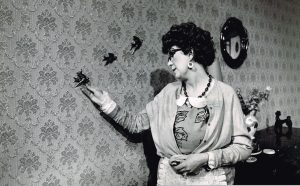 An unrecognisable Fidelis Morgan, padded out for the occasion, speaks in the wheedling tones of a lady who attends Women’s Institutes and is every inch the model of prim, matronly respectability. One expects a Tupperware party, whereas what materializes is a distinctive nightwear party. The contrast is stunning and wholly effective. The Scotsman

“Of the fine cast it is Fidelis Morgan’s Kath who rises most nearly to the depths of the set, and whose extraordinary performance seems to capture most nearly the essence of Orton’s work. Unrecognisably padded, made-up and costumed with exactly the right vileness, she was a perfectly monstrous creation – relishing the double entendres of the script, dusting the china ducks with a will and opening the appalling cocktail cabinet with such perfect timing that its little mirrored light almost won a round of applause. Watching her, with a kind of awed and horrified fascination, made one realise something like the full extent of Orton’s ruthlessness” Plays and Players

Nowhere is this so well achieved as in Kath. The middle-aged landlady ‘adopting’ her baby-faced lodger Mr Sloane into her sexual fantasies is played by Fidelis Morgan as an almost Edna Everage-esque parody of a parody. Glistening with a soft repellent niceness, she becomes preposterous as a character though every sentence is credible. It is a performance playing into the uncompromising cruelty of Orton’s comedy, gradually developing the nature of her ridiculousness as the gulf between the niceness of her manners and the depravity of her behaviour becomes more grotesque. The Times

The role of the anthropologist Crawshaw, originally played by Michael Pennington, was specially adapted so that Fidelis could take the part in Jude Kelly’s production for West Yorkshire Playhouse.