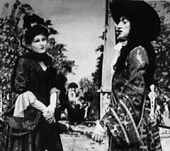 Although she has since then been such a force in the revival of Restoration Drama, thanks largely to her discoveries in The Female Wits , this student production is to date Fidelis’s only performance in a Restoration play.